skip to main | skip to sidebar

When it's not busy being the root of all evil, money is actually kind of useful.

But there's one kind of money that is no good at all, and that's the kind I find when I'm scrabbling around in the botttom of my bag for quarters to feed the parking meter, in the change jar for emergency bus fare and in the line at Starbucks for the few extra cents that will save me breaking a big note: Foreign coins.

As any regular traveler can attest, foreign currency has a way of turning up just when you don't need it. And while it can occasionally stand in as a substitute for legal tender -- DC parking meters are apparently filled with the stuff -- it is mostly pretty useless.

So why do we hold onto it? Something about discarding cash just goes against the grain, but sometimes more complex reasons come into play:
At a recent wedding, my brother put his hand in his suit pocket and pulled out a Mexican coin; gold in the center with silver edges. In my bag I found two coins of similar coloring from Turkey and Israel. We compared them, talked about our travels and then put them back where we found them.

Why? Regular money can't buy you love, but this kind of currency can't buy you anything. Though it's just a form of metal clutter, why do we resist throwing useless money away? 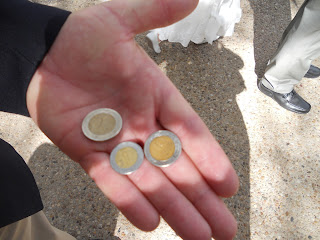 Lucy Chumbley
"For we are the cultural mulattos The bats Neither animals nor birds Hanging in balance." This Indian poem flew out of a cloth-bound book I was cataloguing at Cambridge University Library and hung upside down in my head. I had just moved to England after spending my childhood in the Middle East and Africa. Twenty years and another international move later, I am still hanging in balance, embracing my life as a cultural mulatto. This blog includes some of my reflections on the cross-cultural experience. For a selection of my writing, please visit my online portfolio at http://lucychumbley.com/